A Texas family heads offshore nearly every weekend, using their 350 Outrage on the hunt for wahoo, sailfish and more.

Texans Rick and Rachel Heard first met in dental school at UT Health San Antonio, where Rick was studying to become a periodontist and Rachel a general dentist, so it’s safe to say they share an appreciation for a healthy grin.

These days, it’s another shared passion that has them flashing their pearly whites: boating on their 350 Outrage. Thanks to the Whaler, their weekends and spare hours are now filled with offshore fishing excursions deep into the Gulf of Mexico. And when they’re not in the mood for high-seas adventure, they opt for a leisurely cruise to Redfish Willie’s or another waterfront restaurant near their home in Port Aransas, Texas. Living with easy access to so much water opens up the full spectrum of possibilities. 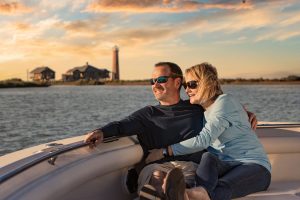 For Rachel, fishing the Gulf is in her blood. She vividly recalls going to the Mako Owners Tournament as a kid with her dad, a South Padre-based fishing guide. Her passion hasn’t waned one bit. “I’ve been fishing pretty much my whole life. I just love it,” she says. It didn’t take long to get her husband hooked, either. “Rick and I actually spent our one-year anniversary with my dad and his friend, fishing a tournament. Rick won first place for catching the largest wahoo!”

“Okay, so maybe it wasn’t the most romantic anniversary,” she adds with a laugh.

The Heards have passed down their love of fishing to their teenage son, Richard, and daughter, Reagan. It certainly didn’t hurt that they had a Whaler to facilitate the tradition. “The ride out when we go offshore is the best,” Reagan says. “I love to look out and watch the waves. That’s pretty peaceful.” She’s also a big fan of catching snapper and mahi-mahi, and often brings friends along for the action. 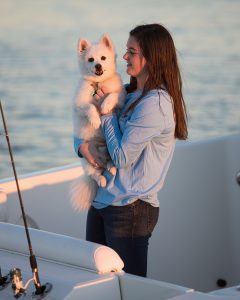 The parents appreciate the opportunity boating affords to bond over something besides Snapchat or Facebook. “I love that it’s a way to get the kids out of the house, into a situation with no cell service,” Rick says, “so they have to focus on nature and on us.”

The Heards’ little Yorkie, Dirby, isn’t so sure about the water, but their other dog, Rusty, can’t get enough. “He absolutely loves going for rides. He’ll jump off land and try to make it onto the boat if Rick leaves him. He’s fallen into the canal so many times,” Rachel says, shaking her head. “He loves the boat so much.”

With or without the pups, taking the Outrage offshore rewards the family with all the fresh seafood they can eat. They typically head about 60 miles out, though they’ve gone as far as 80 in search of fish. “That boat really hauls!” Rachel says. “We’ve caught sailfish, wahoo, tuna, mahi… even barracuda. We eat all of them! Well, except for the barracuda, and of course we release the billfish.” They then vacuum-pack and seal their catches, making sure to give some filets to any friends who helped reel them in.

Another highlight has been the family’s encounters with certain adorable ocean dwellers. “These little pink-bellied dolphins will come up and swim alongside the boat, sometimes for 45 minutes at a time!” Rachel says. “Just skipping across the water, happy as can be. They’ll come all the way up and touch you. It’s incredible.”

In choosing a boat for their family, the Heards knew that feeling confident onboard was a top priority. “Realizing we were going offshore to fish, I wanted the safest vessel possible to bring the family out and bring them back. And it had to be high-quality,” Rick explains. “Quality and safety — these things are best when they go hand-in-hand. That led us to Boston Whaler without hesitation.”

“Rick just read and read and read, everything he could find,” Rachel recalls. “I remember him telling me you can saw the Whaler in half and it’ll still float, that it’s one of the safest boats there is.” 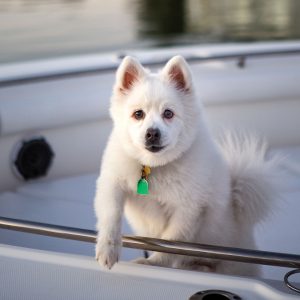 While they suspected they might ultimately want something larger, the Heards chose to start with a 250 Outrage “to make sure it was something we were going to continue doing,” Rick says. They instantly caught the boating bug, and soon decided that more feet were, indeed, essential. “My wife is a ‘the more the merrier’ type,” Rick says. “We knew we wanted the space to bring out a lot of people at once.”

“Well, we have so many friends and family who want to go!” she says.

Trading up to the 350 Outrage last summer meant even more chances to spread the fun around. They’ve wasted no time in putting hundreds of hours on the engines. “We’re going to try and wear it out as fast as possible!” Rick jokes.

The decision has proven to be the right one for their family. “The 350 has really been a good fit for us,” Rick says. “I love the way it’s designed, the convenience of it, the quality. It seems like if there was anything I might have wanted in a boat, Whaler already thought of it.”

The 350 Outrage also introduced them to Mercury® Joystick Piloting. “I do like the satisfaction of being able to maneuver the boat on my own,” Rick says, “but the joystick eliminates any nerves in tight quarters. And with the triple 300 Verados, the performance is fantastic.”

The Heards credit Mike Dyson, their sales representative at Austin’s MarineMax Sail & Ski, with making their experience such a pleasant one. “Mike has come down to the boat several times and gone out with us to show us how to use everything,” Rachel says. “He’s been great.” “Mike and Mark Singleton, the service rep — both of them are top notch,” Rick echoes. 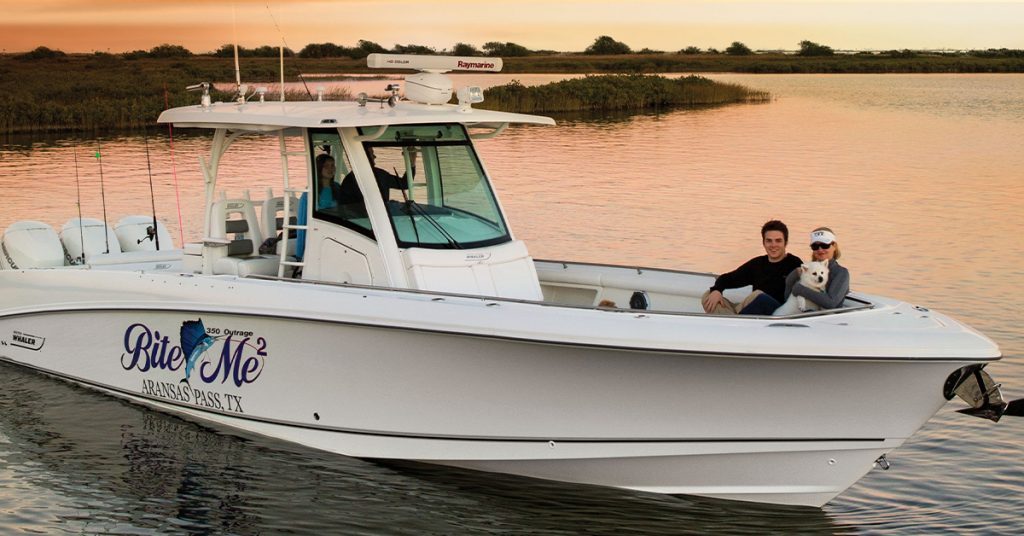 Even when cold weather rolls into town, it’s hard to persuade the Heards to give up their beloved pastime. They’ve taken family Christmas photos on the Whaler, and they’ve even bundled up in ski gear to squeeze a few more precious hours out of the season.

You won’t find them mourning lost opportunities very often, though, because they refuse to let a good one slip by. “We’re enjoying the boat every opportunity we can get,” Rick says, turning to Rachel and exchanging a grin.

An enterprising father and son in Michigan rally the Whaler community to help the environment...

Randy and Abby Crow flock to the Whaler lifestyle, using their 270 Vantage and 170 Dauntless to...

And this is what the Whaler lifestyle is all about. Credit: Jesus Fares, 420 Outrage Owner...