Eyes on the Prize

North Carolina boater Elizabeth Purrington sets her sights on the same boat she drove as a teenage camp counselor.

Elizabeth Purrington had her first experience with a Boston Whaler when she was still young enough to count her age on two hands. As a ten-year-old attending Camp Seafarer in Arapahoe, North Carolina, Elizabeth was able to check out “baby Whalers,” her nickname for the camp’s small, single-engine dinghies.

She and her fellow campers would hop in their respective Whalers and putter around the Neuse River as an older counselor supervised from a 15-foot Montauk. In Elizabeth’s eyes, that counselor had the plum role.

She returned to Camp Seafarer each summer and worked her way up the ranks. At 16, she became a counselor-in-training. At 17, as a full-fledged counselor, she finally scored the position she’d been wanting: “Now I got to be the one driving the Montauk with the littler kids around me in their small boats,” she reminisces.

At 18, she was finally old enough to pull water-skiers as the camp’s motor boating counselor. “The laws required a Coast Guard license to pull skiers — so I trained and got licensed,” she says. “From then on, I was driving the Montauk all summer long.”

She and the rest of the motor boating crew were also tasked with keeping the boats in working order, which meant that the group — all women — learned how to repair motors, take things apart, clean them and get them running again. Elizabeth says the education was hugely valuable, though she adds, “These days, everything is computerized. There’s no way I would touch a modern engine.”

By age 21, Elizabeth’s camp days were over, and it seemed like a chapter of her boating life had closed. Still, memories of driving that Montauk always held in a special place in her heart… until three decades later, when she decided to reopen the chapter once and for all.

“Last year, my husband and I bought a townhouse in Wilmington,” she recalls. “I started thinking, I just turned 50, time’s ticking, and this has been my dream: I always, always wanted a boat.”

So, with that same determination that earned her a role as camp counselor, she set about finding her dream boat. “Everyone around town had suggestions,” she says. “I told them all, no, there’s no need for hunting around. There’s only one boat for me: that Montauk.”

Only one question remained: Did she want to track down a boat from the ’80s and refurbish it, or would she rather have a more current model? When Boston Whaler introduced an all-new edition of the 150 Montauk last year for its 60th anniversary, the question resolved itself.

“I was in love with it from the moment I saw it,” Elizabeth says. “It’s so easy to maneuver — that has not changed in all these years. It’s still so easy to drive, and it’s the perfect size. Our family of ﬁve rides comfortably.”

Elizabeth and her 16-year-old daughter, Sally, frequently take the Whaler out by themselves. “We pass all these boats and it’s all men driving,” Elizabeth says. “I don’t know what they think, but I am the driver.” 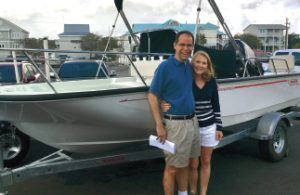 Conveniently, the Montauk ﬁts neatly in the Purringtons’ garage, keeping it safe from the severe storms that can blow through North Carolina. The family takes it to destinations all around Wilmington, including the barrier islands of the Intracoastal Waterway.

Occasionally they’ll stop and ﬁsh, or take the tube or skis for a few laps — causing a swell of nostalgia. “Just getting the tow rope in the water, it’s shocking how it all comes right back,” Elizabeth says.

She’s open to the idea of letting someone else take the helm. “Last year it was too precious for me to let anyone else drive it, but this year I’ll let them,” she laughs. But there’s one thing she’s not open to considering: any other model besides the 150 Montauk.

“Even our dealer said to me, ‘This is a good place to start, but you’ll be back for something bigger…’” she says. “I told him, no. This is IT. This is the only boat for me.”

This adorable group truly embraces the #whalerlife on a brand new 150 Montauk!

A New York boater shares the path that brought him from a used 13-foot tinny to a new 150 Montauk.

Meet the Zimmers, a Connecticut family using their 270 Vantage to unlock endless possibilities on...

We know Holly, we hate heading back to shore too. #190Montauk #WaggingWhalerWednesday