Kelly Rinker has made it her mission to help out dogs that have been dealt a bad hand.

She and her boyfriend, Chuck Babilla, have been fostering abused and abandoned pups for 15 years, working with Sherri Christopher at Guardians of the Green Mile to rescue the dogs from shelters. In that time, Kelly estimates, they’ve brought more than “75 or 100 of them” into their home. As fosters, their goal is to get the dogs comfortable with living as part of a family so they can be adopted out more readily. “Guardians of the Green Mile is an amazing organization,” Kelly says. “Great rescues are why fosters like me can save more.”

Over the years, they’ve “foster failed” several times, meaning certain pups have charmed Kelly and Chuck into adopting them permanently. (And really, who could blame them?) As part of the deal, those lucky dogs get to enjoy the boating lifestyle alongside their human parents.

Chuck and Kelly live in Indiana and keep their Boston Whaler 250 Outrage at the Hammond Marina. Longtime boaters, they purchased the Whaler a few years ago after deciding to retire their jet skis. Chuck knew he wanted a center console model and says Whaler was at the top of his list of brands. When he found out the 250 was available for a good price at their local dealership, B&E Marine, he was sold.

Since then, the Outrage has seen a great deal of use, and has played host to a great number of dogs. At present, the family’s adopted crew consists of three Chihuahuas: Geo, Stanley and Paco; Maxine, a Maltese; and their most recent addition, Calvin, an American Staffordshire Terrier. 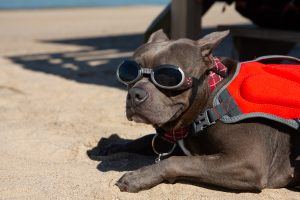 Kelly takes the 10-month-old Staﬀy to weekly obedience classes and showers him with plenty of aﬀection. In the short time they’ve had him, they’ve already seen him make a ton of progress. “He’s still a bit tentative around people, still got a few demons he’s wrestling with, but he’s going to be okay,” Chuck says.

Despite his larger size, the alpha of the bunch isn’t Calvin; it’s little Geo, who runs the household with a wired jaw and single tooth. “Geo’s a neat one,” Chuck says. “He’s the boss, no question. Even Calvin’s afraid of him.”

Stanley, for his part, is the true water dog of the bunch, while the rest demonstrate varying degrees of enthusiasm. Once they’re all suited up in their life jackets and doggie goggles, or “doggles,” all of them are content to bask in the sun and go with the ﬂow.

“They love sitting up front and watching everything happen. I feel safe having them onboard,” Kelly says. “They bark a lot, but you know. They’re little. As long as we put out the potty pad, they’re good.”

When the dogs aren’t along for the ride, the couple likes to open up the throttles and feed their need for speed. Kelly enjoys sitting beside Chuck on the helm companion seat, taking in the view as they hurtle over the waves. From Hammond, they have easy access to destinations all around lower Lake Michigan: Chicago, Michigan City, Grand Haven, New Buffalo… the list goes on.

“The boat is like my SUV,” Chuck says. “I can go all the way up to Saugatuck because it holds 172 gallons of fuel.”

Eventually, their goal is to get the Outrage rigged for ﬁshing, creating even more possibilities. Salmon, steelhead, trout, smallmouth bass — Lake Michigan is populated with a variety of species to keep things interesting. “It’s great that we have the ability to go ﬁshing if we want to. It’s really versatile,” Kelly says. “Sometimes I’m kind of a nervous boater when I get out on a much larger boat, but I don’t worry on the Whaler. It saves us money on gas, too!” 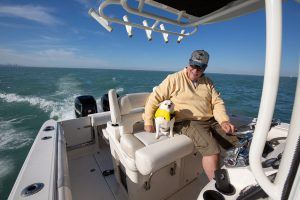 In order to make the most of Indiana’s boating season, Chuck and Kelly are among the ﬁrst to put the 250 in the water every April, and the last to haul it out each November. Late spring is when the region comes alive, with waterfront restaurants along the coast opening their docks to boaters.

The couple frequently heads up to Chicago’s 31st Street Harbor for a beer and a pizza, or to the newly revamped Chicago Riverwalk for casual outdoor eats and prime people-watching. Or they’ll anchor out in “the Playpen,” a designated no-wake zone just oﬀshore where upwards of 700 boats congregate on summer weekends. With stellar views of the city skyline and, at times, a raging social scene, it’s easy to see why the Playpen is a huge draw.

The Hammond Marina oﬀers plenty of entertainment for when they feel like staying closer to home, including the famed Horseshoe Casino, a 350,000-square-foot gaming vessel parked lakeside. Laying claim to the largest poker room in the Midwest, Horseshoe attracts scores of visitors from the Windy City and beyond. Many of them travel by boat and stay overnight in the marina’s adjacent guest slips.

The Hammond Port Authority hosts events throughout the year, including a summer kick-oﬀ party in June, concerts, and a Venetian Night celebration in July. Chuck and Kelly appreciate the sense of community they get from their fellow boaters, as well as those boaters’ canine crew members.

“Lots of people in the marina have dogs,” Chuck says. “I keep treats on the boat to hand out. It’s a friendly scene. With dogs, you can pretty much count on getting unconditional love.” 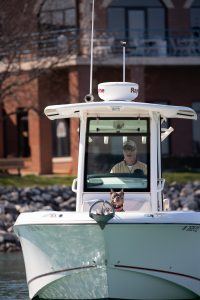 As one of the first center console models in a marina filled with cabin cruisers, the 250 Outrage has drawn its fair share of attention. “It gets people talking,” Chuck explains. “People realize what a perfect dayboat it is. They see how easily we can just get in and go.”

Though Chuck and Kelly have had the Outrage for a few years now, it’s never given them a lick of trouble. “I would recommend that boat to anybody,” Chuck says. “It’s solid as a rock. Ten years from now it will still be going strong.”

He also appreciates that the Whaler is classy without being ﬂashy — a timeless aesthetic rather than a passing fad. “One of the nice things about the brand, it’s not one of those ‘trendy’ manufacturers doing some crazy new style every year,” he says. “Those things look like spaceships. Whaler is more like Harley-Davidson or Porsche; it’s a high-end brand that endures forever.”

“People look at our boat, they love it,” Kelly concurs. “They point at it and wave. Everybody loves a Boston Whaler.” In that way, a Whaler is a lot like a dog wearing goggles: guaranteed to be a crowd-pleaser.

Texans David and Becky Burleson unleash their spirit of adventure — and their appetite for...

Gus is such a stud. #WaggingWhalerWednesday

Whether fishing, diving, cruising or kicking back, Matthew and Renee Chambers use their 370...

Let's go on an adventure!