Meet the Zimmers, a Connecticut family using their 270 Vantage to unlock endless possibilities on the water.

Most of the world knows the tart little gummy candies as Sour Patch Kids, but to twins Reagan and Parker Zimmer, they go by another name: Power Pellets.

It’s an apt description for the 5-year-olds’ favorite boating snack. Out on their family’s 270 Vantage, any grain of sugar they consume is immediately converted into pure, high-octane energy. One minute Reagan and Parker are scanning the shore with their binoculars, looking for lighthouses; the next minute they’re squealing and giggling as they leap off the swim platform, coaxing the family dog, Penny, to jump too. Their mom and dad, Jeanne and Cody, have been known to pop a few Power Pellets to keep up.

“The kids enjoy boating so much,” Jeanne says. “They never complain about a thing; they just love it. For us as parents, it’s wonderful because it answers the question of ‘What are we going to do this weekend?’ Easy: We’re going on the boat.” 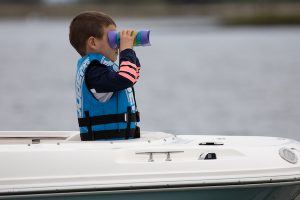 The Zimmers keep their Vantage on the water at the MarineMax Boating Center in Norwalk, Connecticut, a short drive from their home. During the week, Cody works in ﬁnance in New York City, while Jeanne is Chief Operating Officer of the family. Even when their schedules get hectic, they strive to make boating a priority.

“The boat is our decompressing spot,” Jeanne explains. “No matter how stressed we are, we get just an inch from the dock and it all seems to melt away.”

Pup Penny may not need the decompression, but she isn’t about to be left behind. The energetic cockapoo nearly loses her mind at the mere rustle of a tote bag or cooler, anything that might suggest an outing on the boat. “Somehow, she always knows,” Jeanne says. “And come hell or high water, she’s going to be out there with us. Penny is the deﬁnition of ‘where there’s a will, there’s a way.’ She’ll break out of her crate. There’s no stopping that dog.”

Jeanne pauses, then smiles and adds, “I’m not sure who’s more persistent, my husband or the dog.” 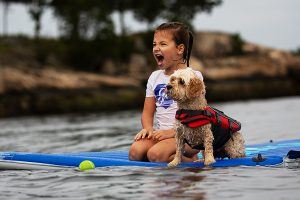 Persistence is a virtue the family holds in high esteem; in fact, it’s what they named their Whaler. “We tell our kids, ‘The Zimmer team never gives up,’” Cody says, citing a favorite Calvin Coolidge quote that begins, “Nothing in this world can take the place of persistence.”

Not surprisingly, in the handful of months they’ve owned the 270 Vantage, the Zimmers have already set and accomplished a number of boating goals. Their ﬁrst was to cruise out past Montauk to Block Island, about a 96-mile run. “We tried it one weekend and had so much fun, we repeated the trip about four times this summer,” Jeanne says. “We encountered a pod of dolphins on one of our trips — that was really neat.”

Over Memorial Day weekend, they took Reagan and Parker down through Long Island Sound and around Manhattan. The twins got to see Yankee Stadium from the water, and were treated to their ﬁrst real-life look at the Statue of Liberty, something they’d recently learned about in school.

The family also loves boating to Rye Playland — the amusement park where Zoltar granted Tom Hanks his wish in Big — for lunch on the boat followed by rides in Kiddyland. “It’s so neat being able to give the kids these memories,” Cody says, rattling off a list of future goals they’ll no doubt achieve. “We want to explore Long Island Sound more, and take a longer vacation to Block Island, and maybe jump over to Martha’s Vineyard… And fishing! We haven’t used it for that yet, but the boat is nicely set up for it.”

Persistence also helped lead them to Boston Whaler in the ﬁrst place. Cody had grown up boating on small lakes in Wisconsin, while Jeanne had occasionally boated around Long Island with friends; life on the water always held a special appeal. By the time they had settled in Connecticut and started a family, the Zimmers knew owning a boat had to be part of the picture. Dreaming of the many possibilities, they began what quickly became an in-depth research project. 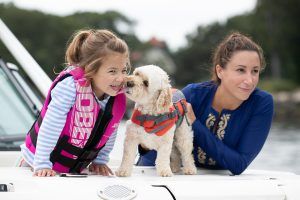 “Cody’s an analyst,” Jeanne says. “To say we looked at EVERY boat on the market isn’t a stretch.” She laughs. “He is tenacious when he wants something. He analyzed and did his research. So it’s fair to say we were conﬁdent about the choice.”

“Initially we weren’t sure if we wanted a cabin boat or a bow rider,” Cody explains. “We considered a lot of options. But when we walked on the Vantage at the New York Boat Show, I said, ‘This is it.’ It’s great for everything — tooling around, fishing, longer trips. It’s got the joystick, so you don’t have to worry about docking. And we knew from everything we’d read that the safety and ride quality were fantastic.”

“It’s not even just the unsinkable part,” Jeanne continues. “We’d been in other boats with lower sides, and you know, kids are unpredictable. With this boat, I felt like they were actually safe. It’s got the higher sides, the rails to hold onto… not to mention the ride was ridiculously good. After the first time out, I said to Cody, this thing cuts through the water like — well, you don’t feel a thing.”

Boating on the Atlantic proved to be quite a change from those quiet Midwestern lakes familiar to Cody. The ocean presented new challenges like learning the tides and taking care to avoid shoals and reefs. Oliver Calloway — a USCG Licensed Captain who works with the Zimmers’ dealership, MarineMax of Connecticut — walked Cody through all the ins and outs, offering guidance and building the confidence to take on bigger boating adventures.

“Our whole experience with MarineMax has been great,” Cody says, crediting General Manager David Dzurilla for always going above and beyond. “I don’t think I’d ever want to own a boat and not keep it where it’s serviced. We pay a little extra to have the dock guys clean and prep our boat because it buys us a little more family time. And if we ever have a service question or anything, they’re on it.”

“Plus, the atmosphere there is so nice, like a boat club feeling,” Jeanne says. “MarineMax hosts barbecues at the marina and other events where you get to know everyone. You don’t feel like just some random person who keeps their boat at the dock. They know us, they know our kids.” 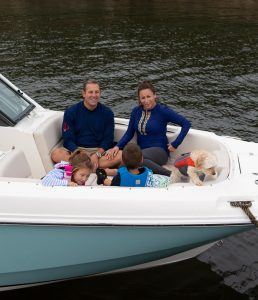 Occasionally, Cody and Jeanne use the 270 Vantage for date nights, taking advantage of the boat’s grill to cook sausages or seafood before cozying up in the cockpit until sundown. Most often, though, the whole family is included in the fun.

“We’re excited for the kids to grow up boating,” Jeanne says. “We love knowing that even as they become teenagers, they’ll still want to spend time with us on the boat.”

To see Reagan and Parker paddling around in the water with Penny, or huddled together on the portside lounge seat, whispering in twin language, it’s clear they’re having the time of their lives. Watching their little ones in action, Cody and Jeanne clearly are, too.

The design of this boat is unforgettable

The Rose family enjoys a laid-back Sanibel lifestyle with the help of their Boston Whaler...