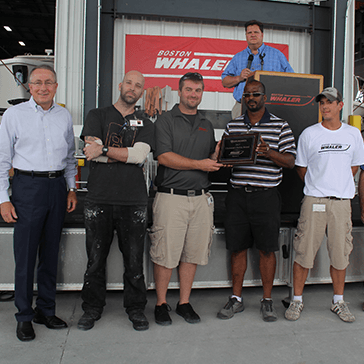 Boston Whalers Edgewater facility was awarded the prestigious Chairmans Safety Award conducted by parent company Brunswick Corporation (NYSE: BC). During a ceremony held on June 4, Brunswick Chairman & CEO Dustin McCoy presented Whalers safety committee with the award, and Boston Whaler announced that it would donate the prize money received in conjunction with the award to local charity Cudas Unhooked.

In his opening remarks, Boston Whaler President Huw Bower addressed the crowd of assembled employees, who were joined by Brunswick executives and members of the press. I am incredibly proud of our team for this accomplishment, Bower said. The safety and well being of our employees is of paramount concern. Its through a shared commitment among everyone at Boston Whaler that weve maintained the highest standards, even as we have grown our manufacturing facilities by nearly 60,000 square feet in recent months. Its an exciting period of growth and innovation that would not be possible without the hard work of our entire staff. Were gratified to receive recognition from Brunswick for our ongoing efforts in the realm of health and safety.

Boston Whaler was one of six facilities to win this years Chairmans Safety Award. The purpose of the program is to encourage, recognize and reward employees and facilities that have achieved outstanding safety and health performance through promoting and practicing safety awareness, ultimately minimizing workplace incidents and injuries.

In his remarks, McCoy commended the group for its outstanding performance. At Brunswick, we believe it is everyones responsibility to contribute to safety in the workplace, he said. We have high standards at Brunswick and work hard each day to ensure the safety of our employees and the communities in which they work and live. We congratulate Boston Whaler and its employees on this tremendous accomplishment.

Boston Whalers Environmental Health and Safety Manager Chris Carver then took the floor to introduce the safety team and to announce Cudas Unhooked as the recipient of the $10,000 Brunswick award money, with an additional contribution of $1,700 directly from Boston Whaler. The local organizations mission is to provide necessary support to financially challenged or at-risk students of New Smyrna Beach High School. Cudas Unhooked Chairman Shawn Lane and his son, Chad, thanked everyone and explained that the money will be put towards building a new five-bedroom home, just two blocks from the high school, to house students in need. Whalers contribution will cover the cost of lumber to complete the project.

Boston Whaler Vice President of Operations Rebecca Crews closed the ceremony by extending her sincere pride in the safety efforts of all the employees. We have one of the best manufacturing teams around! Crews said.

Following the ceremony, a company gift was presented to all employees, along with a celebratory luncheon.