The Barters crisscross the Florida-Alabama border to enjoy uninterrupted time on their Boston Whalers.

Aaron Barter has been a Whaler fan since he was in diapers. Now that he and his wife, Meghan, have kids of their own, they’ve continued the tradition of Whaler ownership and a life enjoyed on the water.

“The brand speaks for itself,” Aaron says. “Whalers are unsinkable, they’re safe, and if I’m taking my family out on a boat, it’d better withstand the test of time.”

The Barters live in Pensacola, Florida, and mostly boat around Orange Beach, Alabama, where they have a condo. Aaron’s love for Whaler started much farther north, however. His affinity for the brand stems from his childhood growing up in Boothbay Harbor, Maine, where his father worked as a lobsterman. His grandparents also operated a popular clambake on nearby Cabbage Island. “I was 2 months old and I was on my grandmother’s Boston Whaler,” Aaron recalls. “She had probably four or five of the original Whalers.”

Aaron’s grandparents, Donald and Ruth Leavitt, owned Cabbage Island, which they bought in the late 1940s. For more than 20 summers, Ruth ran authentic Downeast clambakes there twice a day. She cooked the Maine lobster and clams in seaweed and baked the whole affair covered in rocks. Aaron says the staff used one of the family’s Whalers to gather seaweed from the island’s shoreline. The rest of the Whaler fleet ferried staff from the mainland to the island and back.

To transport tourists to the event, Donald used passenger boats named Linekin I, Linekin II and Linekin III. Guests dined on the seafood along with corn on the cob, potatoes, onions, and Ruth’s famous New England Fish Chowder and equally lauded blueberry cake. She graciously passed both recipes on to the island’s new owners after the Leavitt family sold it in the ’80s, and gave them her blessing to relaunch the clambake tradition after a several-year hiatus.

A Journey to the Emerald Coast

After settling in the Florida panhandle, where miles of sparkling Gulf waters awaited their exploration, Aaron’s nostalgia for his childhood kicked in. The Barters wanted a vessel for enjoying quality family time with their sons Will (13) and Jack (11). “When we were deciding to buy a boat, Whaler was all he wanted to look at,” Meghan says of her husband.

The Barters had found their way to Florida after meeting in Virginia, where they worked in the same university athletic department. Meghan’s parents had retired in the Pensacola area, prompting Meghan to seek a job there. She landed a position as the associate director of athletics for the University of West Florida, and the couple’s South Coast tenure began. Meanwhile, Aaron switched fields, earning his master’s degree in healthcare administration. He now owns an anesthesia management company. 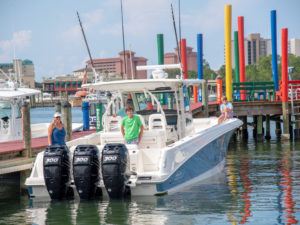 Weekdays are a blur of work and shuttling the kids from one sporting practice to the next, so the Barters use the condo and their Whalers as a way to get everyone in one place, reconnect and decompress. During the school year, they’ll take off on a Friday evening and stay in Orange Beach until Monday morning. The drive back to Pensacola is short enough that they can spend Sunday night relaxing and then haul the kids straight to school when they wake up.

“When you’re at home, you feel like you’ve got to clean and do laundry,” Meghan says. “But the condo is far enough away that it just allows us to have family time.”

Whaler Fleet Through the Years

The Barters currently own a 2016 370 Outrage and a 2018 240 Dauntless Pro. They’ve landed on these models after several Whaler purchases from MarineMax in Pensacola, with the help of Kit Bodree. “He’s more than just a salesman,” Aaron says. “He’s a friend. Just having that camaraderie. When you go into MarineMax, you actually feel special.”

The family started off with a 2012 280 Outrage and then added a 170 Dauntless to the mix. They eventually traded the 170 Dauntless for a 240 Dauntless in 2014. Meanwhile, they traded in their 280 Outrage to buy their current 370 Outrage. “Then when the Dauntless Pro came out,” Aaron says, “I had to have the new one; I’m not going to lie. And it’s easy that Kit has my credit card number and can just add on any boat he wants,” he adds with a laugh.

All joking aside, Aaron and Meghan say they like walking out of the dealership knowing they’ve received a good deal. Plus, they feel like they can’t go wrong when buying a Whaler. “Everything with Whaler is first-class,” Aaron says. “The fit and finish is far superior to what you get on any other boat. You get so much more for your money.”

Adding to the value are the vessels’ engines. The 370 Outrage runs on triple 300s, and the 240 Dauntless Pro has a 350—all Mercury FourStroke Verados®. “They’re dependable and so quiet,” Aaron says.

He tells the story of picking up the Outrage at MarineMax one day after it required some routine maintenance. He headed down to the dock where the service folks had it ready for him. “I tried to turn the engines on, and they were already on,” he says. “I couldn’t hear them!”

The Barters use the 370 Outrage for a mix of fun and relaxation. The Emerald Coast has a smattering of islands to explore. They’ll head to one for the day and use the built-in grill onboard for lunch or dinner. The boys like to jump off the back of the boat and swim or toss a ball on the beach. “If the kids are wanting to be lazy,” Aaron says, “they can go down underneath and stay in the air conditioning.” 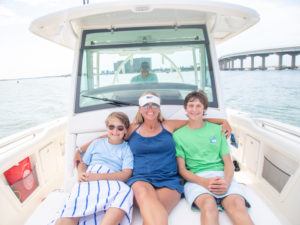 The family is also trying their hand at fishing when they have the time. Early summer is red snapper season, so they’re gearing up for that. “It’s nice that the boat is multifunctional, and you’ve also got the safety of a Whaler,” Aaron adds.

The Barters like using the 370 Outrage as a basecamp for other activities. They’ll load the boys’ kayaks onboard and let them head out down an area called Old River. “They get to be free, but yet we’re following behind them,” Meghan says.

In addition to quality family time, Meghan appreciates the boat for its ability to hold her crew of sorority sisters and their families when they all gather for a week in the summer at the Orange Beach condo. They enjoy taking the boat out to watch the U.S. Navy Blue Angels perform.

The Outrage, called Captains Daughter, is named after Meghan since she’s the daughter of a retired naval captain, but it also signifies how much Aaron treasures the boat. “I don’t have a daughter. I have two sons,” he says, “so this is my daughter.”

They use their 240 Dauntless Pro, which they unofficially call The ’Bama Boat, as more of a water taxi and to get into tight spaces. “It’s kind of a shuttle-around boat,” Aaron says. “It’s easy to get in and out of if we’re going to a restaurant or whatnot.” The Barters have several favorite on-water eateries they frequent, and they like to make dining out part of their weekend adventures. 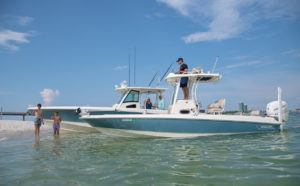 Ultimately, no matter what they’re doing or which boat they’re on, the Barters like both Whalers for securing time with their boys as they enter their teenage years and grow increasingly busy with sports and developing their independence.

“Nowadays there’s so much you don’t get to do as a family because stuff gets in the way and we’re always running around,” Aaron says. “Boating just brings our family together.”

A Texas family heads offshore nearly every weekend, using their 350 Outrage on the hunt for wahoo,...

Join the Boston Whaler Community - and see where your adventures lead you.

A husband-and-wife duo travels the Great Loop from Michigan to Florida on their 315 Conquest in...