Texans David and Becky Burleson unleash their spirit of adventure — and their appetite for fishing — with a little help from their Whaler.

When a fish is on, the crew aboard David and Becky Burlesons’ 380 Outrage is a well-oiled machine.

The two, along with their trusted fishing guides Ashly Fenton and Rick Sowers, move in harmony, tag-teaming like old pros. “You take this one!” somebody shouts, while a free pair of hands grabs a spare reel and pulls it out of the way. Soon, a behemoth mahi or sailfish appears on the deck, a triumphant symbol of teamwork, skill and grit. 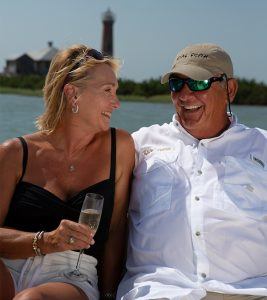 You’d never guess the couple were newbies to the sport. Yet, prior to this summer, Becky says with a wink, “You probably wouldn’t catch me holding a rod. The only thing I held onto was a glass of champagne!”

The Burlesons purchased their 380 Outrage in 2017 and initially planned to use it for leisurely cruises in the bays around Port Aransas, Texas.

But within weeks, a latent passion began to emerge in both of them, stirred by the capabilities of their new boat. It wasn’t long before they’d fallen in love with fishing, hook, line and sinker.

“Before this Whaler, we sort of played like we were fishing, but it wasn’t something I thought I wanted to do,” Becky explains. “We love being on the water, and for years that was enough for us. Now our boating has gone from relaxing and watching the dolphins swim past to some really hardcore fishing.”

The Burlesons are quick to credit their fishing guides for helping them make the turn. With Ashly at the helm and Rick in the cockpit, showing them the ropes, they were able to get up to speed quickly. “Those guys really got us fired up for it,” David says.

The incredible variety of fish they encounter out in the Gulf of Mexico helps keep those fires stoked: Blue marlin, sailfish, wahoo, tilefish, red snapper, mahi-mahi… the list goes on and on. Already their photo album is filled with images of them grinning proudly, holding up a startlingly huge specimen of one kind or another. 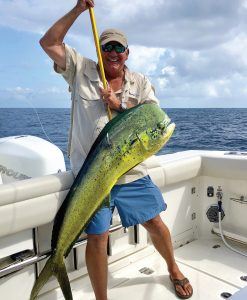 Part of the fun for the Burlesons is sharing their bounty with friends and neighbors. “We decided we’re not about filling up the freezer with fish,” Becky says. “Normally when we have a nice catch, we feed the masses. We put the call out to a big group: ‘We’re gonna make fish!’ And Ashly takes some to whoever he knows would appreciate it.”

Besides being the neighborly thing to do, their generosity provides a perfect excuse to head back out. “We don’t need to ﬁll the freezer with ﬁsh when we can always go out and catch it fresh all over again,” Becky says.

The couple has made a lot of friends by embracing the marina culture in Port Aransas. David describes the “Coconut Telegraph” approach that keeps everyone in their tight-knit group informed of the latest news and the best bets for fishing. “We all speak to each other all the time, you know, ‘This is where we are, this is what we caught, this is how we did it…’” David says. “It’s great to see people helping each other.”

He and Becky split their time between their home in Canyon Lake, about 3 hours north, and their place on the Gulf. (The ratio gradually seems to be tipping in favor of the latter.) October and November tend to be their favorite months, after the intense heat of summer has been replaced with milder temperatures.

While they may be new to serious fishing, this isn’t their first rodeo when it comes to boating. A native of Texas, David grew up around the water, and by age 18 had already bought his first bass boat. Over the years, the Burlesons have owned several Boston Whalers, moving from a 170 Montauk (“Great little boat,” David says), to a 220 and then a 230 Dauntless, followed by a 315 Conquest, and finally the 380 Outrage.

“I’d always known about Whalers,” David says. “Growing up, I knew people who had them and raved about them. Very stable, dry, all those good things. And from a resale standpoint, they hold their value better than anything. As we say in Texas, they’re bulletproof!”

For their last several purchases, Sail & Ski has been their go-to dealership, with locations in Austin, Lakeway and San Antonio. “Sail & Ski has been really good to us,” David says. “We’ve known our salesman, Mark Pena, for about 25 years. He’s always there to help if I need something; he’s really become a friend. And Service Manager Mark Singleton and his son, Steven, take great care of us. They’re super friendly, super knowledgeable.”

As it turned out, the Outrage took a circuitous path to get from Boston Whaler’s manufacturing facility in Edgewater, Florida, to the Burlesons. Right as the boat was being prepped for delivery, Hurricane Harvey struck, wreaking havoc on Port Aransas. Before the dust had settled in Texas, Florida faced its own onslaught with Hurricane Maria. Th e Whaler was whisked to Lake Travis, where Sail & Ski looked after it until the Burlesons’ home marina had been restored.

“We should have named the boat ‘Hurricane Dodger,’ or something like that,” Becky says with a wry laugh. “The season was a rough one for a lot of people.”

“Port Aransas was all torn up,” David recalls. “Everything was closed; there was debris everywhere. It’s still not back to normal — this year, a lot of condos and hotels haven’t reopened yet. But I tell you, the locals have to be the strongest group of people I’ve ever met. They just keep going and going.”

Beyond their deep-sea fishing adventures, the Burlesons continue to enjoy sharing their boating lifestyle with family and friends, squeezing in the occasional “just us” time, as well. Comfort-minded features on the 380 Outrage make it as well suited for pleasure cruises as it is for chasing monster fish. “All we do is mention we’re going out and people raise their hands. We’ve become quite popular!” Becky laughs. 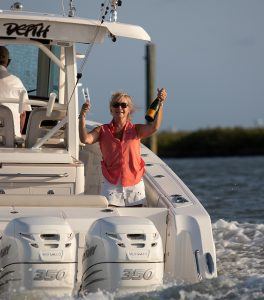 When in relaxation-mode, she favors the boat’s forward lounge, an inviting spot where she can cozy up with her grandkids.

David typically mans the helm, where he’s happy to let Skyhook and Joystick Piloting technology make his job easy. “My 4-year-old grandson will sit up next to me and act like captain. He thinks he’s driving us all over the world,” David says, chuckling. “He doesn’t need to know it’s on auto-pilot.”

From feasting on the ocean’s finest, to spending quality time on the water with loved ones, the Burlesons are grateful for all the ways their Outrage is enhancing their lives — including their newfound sport-fishing addiction.

“The boat and all the people we’ve met at the marina have opened up a whole new world for us,” Becky says. “It’s been a blessing, it really has.”

For a South Padre Island frequenter, a 345 Conquest serves as the ultimate offshore fishing...

Experience true confidence to the core with the 380 Outrage.

Cast your line with the 210 Dauntless

The all-new 330 Outrage made its World Premiere in Fort Lauderdale.