A 130 Super Sport proves itself the perfect tender for a couple in the Pacific Northwest. Read all about their travels.

Growing up on Puget Sound in the Seattle area, I had wanted a Whaler since the first time I laid eyes on one. In high school, my brother and I drove a bevy of boats; some we made, some we bought, all made out of wood. But across the inlet to Oyster Bay lived a 13-foot Boston Whaler… and I wanted one.

Many years later, while in graduate school, I worked in Connecticut as a water-ski instructor for kids from New York City. We had two boats at the camp and my favorite was a 15-foot Boston Whaler. When I wasn’t teaching the kids how to water-ski, I would take the Whaler out on the lake (Dog Pond) by myself and crank the wheel at high speed, loving the feel of the boat clawing into hard turns. But it would be several decades later before I had my own.

A few years ago, with the kids grown and all but out of the house, my wife, Diana, and I discovered big boats and the cruising/exploring lifestyle. At the Seattle Boat Show in 2012, we found and fell in love with an open-ocean capable, 1999 50-foot Nordhavn. Three months later, we were cruising the waters of Washington and British Columbia and loving every minute of it.

The Nordhavn came with a 10-foot rigid-inflatable tender with a 15-horsepower motor that was adequate but it couldn’t plane with more than two people aboard, it would only do 15 knots, and it just seemed too small. Here was the opportunity for a new tender: a Whaler.

In 2015, at a boat show in Portland, Oregon, we found the Boston Whaler representative and quickly cut a deal on a new 130 Super Sport with the 40-horsepower Mercury engine. Adding the bow railing, a bimini top and the Glacier Green hull color to the basic package, we were set.

That April, we loaded the Whaler onto the back of the Nordhavn, cast off the lines and headed down the Columbia River, traveling 110 miles to the Paciﬁc Ocean and on to points north — way north — including Angoon, Alaska, where we saw humpback whales breaching; and up to Prince William Sound for breathtaking glacial views.

In November of 2015, we set our sights on destinations farther south: After a 1,000-nautical-mile trip from Portland to San Diego, we joined the CUBAR (Cruise Underway to Baja Rally). The event, hosted by the San Diego Yacht Club, was conceived by boater Bruce Kessler as a way to help powerboaters experience long-distance cruising to Mexico within the safety of a large flotilla, complete with mechanical and medical personnel.

Alongside more than 30 other boats, we set oﬀ for new adventures in a new country! Twelve days later, we made it to La Paz in Baja and began exploring the Sea of Cortez. Again, our 130 Super Sport proved an ideal vessel for travels ship to shore, ship to ship, and ship to margarita — I mean, ship to marina. From the Gulf of Alaska to the Sea of Cortez and beyond, our Whaler has taken us exactly where we want to go: new adventures! 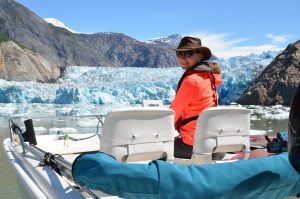 We know Holly, we hate heading back to shore too. #190Montauk #WaggingWhalerWednesday

An enterprising boater travels from Venice to Milan by Boston Whaler.

A Boston Whaler with reliable, state-of-the-art Mercury power is the true path to Core Confidence.