When Colorado summers fade, Florida winters take center stage for a pair of avid anglers and their 330 Outrage.

Ray Cooper and Anita Valdez have a brilliant system worked out: They spend half the year in Colorado, and the other half in Florida — meaning you’ll find them enjoying perfect weather for their boating lifestyle approximately 100 percent of the time.

The couple hails from Broomfield, a suburban city nestled between Boulder and Denver that’s home to a fast-growing tech industry. Opportunities for outdoor recreation abound, from hiking, horseback riding and biking in the summer to epic skiing and snowboarding in the winter. (Living in the shadow of the Rocky Mountains definitely has its perks.) Hands-down, though, the outdoor activity of choice for Ray and Anita is fishing.

Each fall, they wave goodbye to plummeting temperatures and impending snow and head for the warm embrace of Florida’s Gulf Coast, where their winter home and a 330 Outrage await.

The couple purchased their Boston Whaler in September of 2017 and took delivery shortly after Hurricane Irma swept through the region. (The new boat rode out the storm unscathed.) Ray uses a walker, so they had been on the hunt for a model with easier access than their prior boat. The Outrage’s portside dive/boarding door proved to be just the ticket. They can lay down a platform to bridge the gap between dock and boat, and step directly into the cockpit — no stairs or ramps required.

“On our last boat, it was really hard for Ray to get on and oﬀ,” Anita explains. “We saw that this one had a side door; we knew someone with a Whaler who was telling us about it. He swore he wouldn’t give it up for the world.” 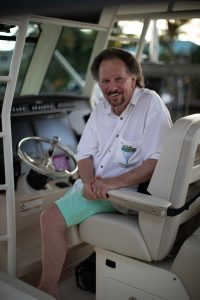 Intrigued, they sent a friend to their dealership, MarineMax of Fort Myers, to check it out. “As soon as Ray saw the photos, he fell in love with it,” Anita says. “He must have looked at it on the internet about 2,000 times!” They were equally impressed with Whaler’s reputation: “We had always heard good things about the brand. As they say, it’s unsinkable — crack it in half and it’ll stay aﬂoat. You can’t beat that!”

Plus, the Outrage oﬀered the level of performance they were after for their boating lifestyle. Its sleek variable-deadrise hull and a pair of burly 350-horse-power Mercury Verado engines sealed the deal, ensuring quick hole shots and fast planning, along with impressive fuel economy. 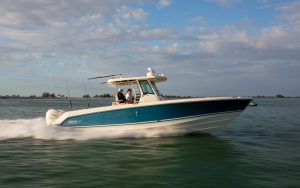 When the day ﬁnally arrived to hand over the keys, MarineMax showed them white-glove service, getting Ray set up with an electric helm seat so that he can get situated easily and drive comfortably. Sales Executive Brian Kemmis and his team showed Ray and Anita how to operate the boat and its electronics, making sure they were fully conﬁdent before heading out.

“They did a really thorough job walking us through things,” Anita says. “The techs there are so knowledgeable. They’ll come right out and take care of whatever needs to be done. And we’ve got Brian on speed dial for ﬁshing questions. He’s the best.”

These days, Ray is retired, having sold his successful Harley-Davidson business in Colorado about four years ago. Since then he and Anita have made boating and fishing their full-time passion. Asked if he still works, Ray cheerfully responds: “Fishing is the work!”

Their house is right on a deep-passage canal with direct access to the Gulf of Mexico and its healthy gameﬁsh population. They keep the Outrage on a lift so it’s ready to go whenever they get the urge to drop a line. With more than 200 hours on the Whaler’s engines, it’s safe to say the urge strikes often.

A typical run involves heading 60 miles or farther oﬀ the coast, stopping here and there to catch bait before hitting deep water. They usually bring friends along and make a day of it. “We go for grouper, snapper… Porgies are my favorite. We haven’t gotten any tripletail yet but I’d like to try for those,” Anita says, adding that they’ll gladly eat what they catch. “We keep the keepers!” 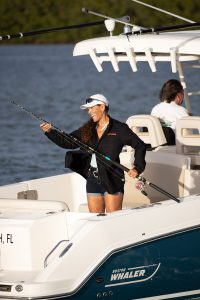 In between fishing trips, the couple enjoys cruising the Intracoastal Waterway to places like Tarpon Point. Anita raves about the comfort-minded amenities that make the 330 Outrage as well-suited for leisurely afternoons as it is for grappling with grouper.

“There are so many nice things about it, like the awning over the bow. You can drop anchor and relax while staying out of the hot sun,” she says. “We instantly liked all the features, really. Especially the Joystick Piloting.”

The joystick makes negotiating tight waterways and crowded marinas easier. It also aids in sliding the Outrage into its lift at the end of the day.

Once they’ve had their ﬁll of activity and tucked their Whaler in for the night, Ray and Anita often kick back beside their pool, which overlooks the canal. There, they can toast to another perfect Florida winter, and dream about Colorado summers to come.

Make every fishing trip legendary with a Boston Whaler

David Horner battles high rollers and big species out on the Gulf in his Boston Whaler 320 Outrage.