Sarasota Bay, an estuary off the west coast of Florida, offers great fishing opportunities year-round, especially if you’re up for skinny water. And by skinny, we’re talking less than two feet.

Heading into the tight spots on the hunt for fish, I knew having the right boat would be key. I had always enjoyed the flagship of Boston Whaler’s Dauntless family, the 270 Dauntless, but wasn’t sure whether it could go shallow enough to unlock Sarasota Bay’s best fishing locations. Still, I was determined to make it work.

Upfront, I opted out of the portside swim platform to cut down on extra weight, but there was still the matter of the engines. This center console model is available with twins, but after considering the options in terms of performance, overall boat weight and fishability, I decided to test out this beautifully designed fishing machine with a single 350-hp Mercury Verado®.

Another tip: I kept my fuel load down to 40 gallons because the boat is very fuel efficient and that’s all we need for a day. I also installed a Porta-Bracket hydraulic lift kit on the engine, which aids in overall performance and, more importantly, makes the shallow-water entry so easy.

And while there aren’t many boats nearing 30 feet in length that you can mount a trolling motor onto the front of, that’s precisely what I did with a 36-volt MotorGuide, along with three more batteries. To my pleasant surprise, I was able to float the Dauntless into 12 inches of water. Yes, you heard that right, 12 inches.

So, Sarasota Bay, here we came—camera crew and all—in search of redfish. The north side of the bay starts in Manatee County and continues to south Sarasota County, stretching between barrier islands, or keys, that separate the body of water from the Gulf of Mexico and the mainland.

These waters house many snook, trout and the aforementioned reds, thanks to the bay’s miles and miles of grass flats. Large populations of baitfish, shrimp and crab make the area perfect feeding grounds for these feisty fish. Redfish don’t care too much about structure, water depth or clarity, but what they do care about is food. Stay with the baitfish and you’re more likely to find them.

Redfish weren’t always so sought-after — many considered them trash fish — but over the years, they’ve become a favorite target of inshore anglers. In fact, an entire tournament industry has sprung up around catching them. Without a doubt, this one-of-a-kind species is tough, powerful and a beautiful fish to fight on light tackle.

As our trip got underway, we broke out of a channel, dropped the trolling motor down and slowly maneuvered toward a small island and into what we thought was a school of redfish, because we’d seen the water rippling with jumping mullet. (Redfish often migrate with mullet, so that can be a clue to finding them.)

The most important element here is to not spook the redfish school, so a stealth approach is key to having success. With light tackle equipment, we could cast pretty far, so we set up quietly and deployed our Power Pole anchoring system. As suspected, there were redfish mixed in with the mullet — we could see them clearly with our polarized sunglasses. The adrenaline started to flow. Now it was time to have some fun.

Our go-to lures were the Live Target mullet for me, and my fishing buddy was using a Live Target sardine twitch bait. Within three casts, I hooked up and the fight was on.

We soon observed that this was a much bigger redfish school than we had expected, so I definitely didn’t want to spook them too much. I reeled harder, using the rod to pull the fish away from the school.

That’s another great tip to remember, because when you hook a redfish, she’ll want to fight within her group, so try to get her out as best you can. Of course, in most cases that’s easier said than done. One look at a redfish and you know it’s built for brute strength.

Before too long, I had her beside the Whaler — and what a beauty. Broad, blunt head trailing a long, V-shaped wake; gold tail flashing that distinctive black spot. We must have caught eight reds from this school before we had to move on, but man oh man, what a blast.

No question, Sarasota Bay is a beautiful place to spend the day on the water. If you’re ever nearby, give this location a shot. And whether you like to fish inshore or offshore, or just want a boat you can enjoy time on with the family, as far as I’m concerned, the 270 Dauntless is the perfect boat for the job. 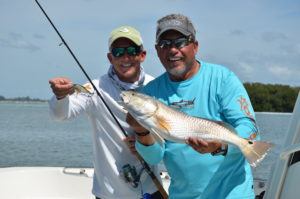 There’s an old saying, “Fish are where you find them.” This certainly bears true for redfish, but fortunately they are creatures of habit, so it’s possible to make an educated guess about where they’ll be. Typically, reds migrate in and out of coastal inlets in the colder months. The bottom line here is that season and tide are the two major factors in locating redfish. If you do find them, make a note — literally — of the tide stage, weather pattern and specific location so that you can return on a similar day and find one of the most exciting gamefish on the flats.

A Dauntless a day keeps the doctor away! Which one's your favorite?

Far Out
Far Out

David Horner battles high rollers and big species out on the Gulf in his Boston Whaler 320 Outrage.

For a South Padre Island frequenter, a 345 Conquest serves as the ultimate offshore fishing...