A husband-and-wife duo in San Antonio, Texas, apply ingenuity and experience to design their own seamless days on the water with their 230 Outrage.

The story of how Texans Bob and Lee Perkins met is almost too perfect.

Twenty years ago, Lee was working at Sears as a retail manager in appliances, while Bob was a service manager in the technical department. Their paths would cross from time to time, and it wasn’t long before the spark grew into a ﬂame. After several run-ins at work, Bob took the plunge and asked Lee if she would like to go water-skiing with him. To his delight, she happily accepted the invitation.

Or, as Lee likes to tell it, “They used to have the slogan ‘Sears has everything!’ Turns out they were right, Sears had everything—even a husband!”

Since that ﬁrst water-skiing date, the couple’s mutual love of the water has only grown stronger. Over the years, they have owned many boats and put many nautical miles on their engines. Now that Bob is retired, they have more time to spend together on their local reservoir, Medina Lake. The emerald-green, crescent-shaped body of water shrinks and swells depending on rainfall levels; recent surges have pushed it, thankfully, toward full capacity. 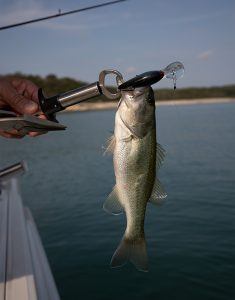 As the water returned, so did the supply of ﬁsh, thanks to restocking eﬀorts by the government. The Perkinses appreciate a healthy lake for many reasons, ﬁsh being chief among them. Largemouth bass and hybrid stripers abound, to the point that some days Bob and Lee catch and release more than 40 ﬁsh in a morning. The early birds are more than happy to wake up before dawn to cast their lines and enjoy the lake before the crowds roll in. “On weekends, we make sure to be oﬀ the water before beer-thirty,” Bob says with a chuckle.

Located about an hour away from San Antonio, Medina Lake is a short 9-mile drive from the Perkinses’ house. That’s where they keep their latest boat, a new 230 Outrage, in a custom garage that Bob designed and built. It’s just one of many signs pointing to his deep and abiding ingenuity. Another prime example: He engineered a ladder to run from his trailer to the bow of his boat, so they never have to step foot in the water at the boat launch.

“Thanks to my time at Sears, I’ve worked on everything from an egg incubator to a VCR, so if there’s something that needs a solution, I’ll make it,” Bob says. He also mounted a special tool rack to the rear of the Outrage to keep a knife and a set of pliers handy. (It’s so seamlessly integrated that if you didn’t know better, you’d assume it was a factory-installed feature.) 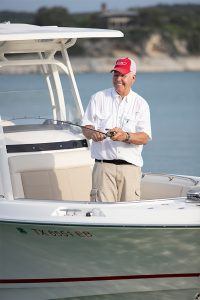 But to hear them rave about it, there’s not much Bob and Lee would change about their boat. The 230 marks the Perkinses’ fourth Outrage, and their ﬁfth Whaler; with each iteration, they’ve grown more smitten with the brand.

“We’ve never had a Whaler that we weren’t thoroughly in love with,” Lee says. “We’re always sad to get rid of them, but of course we love the new one.”

“Every time we get a new boat, my wife says this will be our last one,” Bob says. “But this time it might actually be true.”

“The Outrage has some niceties I really like,” he continues. “The pull-down seat in the back, the portable head in the console.… They pushed the gunnels out to make a lot of space; you can ﬁt 9 or 10 people in the boat very comfortably. It handles really well, rides really smooth. And those Mercury® Verado engines—we’ve had four of them now, and they’re so quiet and powerful. Great fuel efficiency.”

Lee notes how impressed she is with the boat’s versatility: “You can take it oﬀshore, but you can still put it in 3 feet of water if you want to ﬁsh inland. It’s just so multifaceted.” 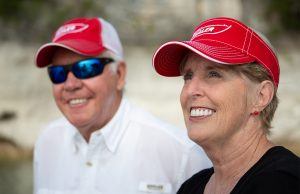 The Outrage’s performance characteristics come in handy when the Perkinses venture out into the Gulf of Mexico, sometimes more than 20 miles, in search of bigger fish and bigger thrills.

“Between the boat riding well and Bob’s longtime ability to drive an ocean, it’s phenomenal,” Lee says. “I remember the ﬁrst time in our 16-footer, cresting a big wave, my feet would come oﬀ the ﬂoor and I would squeal! I just love it.” Bob adds, “It’s not fun to ﬁsh in waves that tall, but it’s sure fun to ride in them.”

When conditions cooperate, they enjoy tracking down kingﬁsh and shark out on the Gulf. They have plans to go red snapper ﬁshing further down the coast toward Port Mansﬁeld. And when they get the chance, they’re overjoyed to bring their family along.

“We have grandkids who live in North Central Texas and who go ﬁshing with us about once a year,” Lee says. “To me that’s a big honor, when your grandkids want to hang out with you!” The Perkinses have been customers of Sail & Ski in San An-tonio since 1990, as they worked their way from a ski boat to a 16-foot Boston Whaler Dauntless, followed by a 19-foot Outrage, a 21-foot Outrage, a 24-footer, and ﬁnally the 230. They are quick to sing the dealership’s praises. “Sail & Ski is always right on top of things. They do great work,” Bob says.

He doesn’t leave them with much to take care of, though; the Outrage, like all of the Perkinses’ boats before it, gets bathed and washed religiously.

“If he can’t go out on the boat because it’s raining, he’ll go out and give it a little kiss,” Lee jokes before noting, “Bob is a fanatical perfectionist. These Whalers are just his dream because they don’t give him any trouble at all.”

Bob nods in agreement. “I’ve been boating for more than 50 years, so I know what boats can do and should do. That Whaler is tough to beat.”

The Barters crisscross the Florida-Alabama border to enjoy uninterrupted time on their Boston...

A 270 Dauntless empowers one couple's adventures on Lake Michigan and beyond.