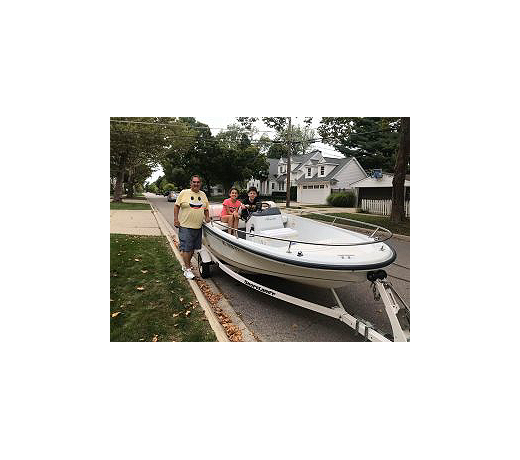 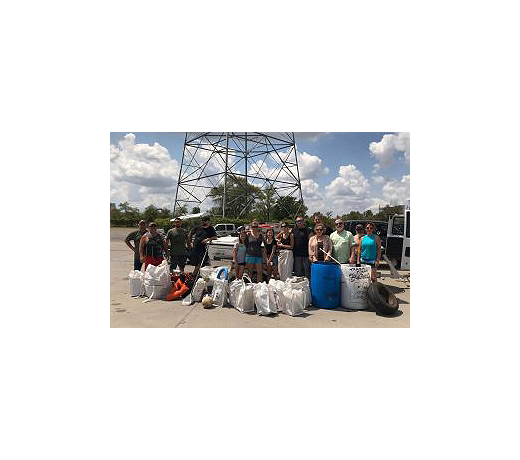 An enterprising father and son in Michigan rally the Whaler community to help the environment through some friendly competition.

What do these items have in common? They’re all things that Tom Nardone and his 13-year-old son, Mark, get quite excited about. That’s because they’re all pieces the two have plucked from the Detroit River when they’ve been out fishing for trash.

That’s right — the sport of “trash fishing” is one of the father- and-son duo’s favorite activities. Tom credits Mark for inventing the concept. About two years ago, Mark saw a program about picking up trash from the ocean and was inspired. “He said to me, ‘Dad, we should get a boat and do that!’” Tom recalls. “When you’re 11, the ocean is whatever’s near you.”

So they began studying nautical maps to figure out where trash naturally collects in the waterways near their home in eastern Michigan. Then they set out to comb the currents, shores and grassy wetlands for garbage of all shapes and sizes.

They quickly learned what floats — car tires, styrofoam — and what has to be fished up from the bottom — beer bottles, garden hoses. They learned to keep track of the more memorable items. And they whooped with glee any time they came across a “honey hole.” (Turns out, just like fish, trash tends to gather around bridge trestles.)

Asked to name the most interesting discovery so far, Tom recounts: “Once we found a Coast Guard beacon buoy. The kind they used to drop when someone fell overboard on a freighter, to mark where it happened. There was writing on it that said ‘non-explosive’ but the ‘non’ was covered in algae. Our first thought was, ‘What IS this?!’”

A quick call to the Coast Guard reassured them that, no, they were not holding a bomb.

After their first season spent fishing from a very small inflatable boat, the Nardones realized they needed something bigger and hardier. That’s when they acquired their Boston Whaler Rage, a 15-foot jet boat model produced in the mid-1990s.

The Whaler proved to be the perfect craft for the job, for a number of reasons — not least of which are the unique challenges involved in leaning way over the side to grab those illusive floating objects.

“There’s plenty of space onboard. That includes space for somebody to lay down on the front of the boat and reach their arms out,” Tom says. “The Whaler is good and stable, so it won’t tip. Plus it’s well made. And it’s easy to wash down — basically the dream trash fishing boat.”

From the beginning, Tom and Mark envisioned the activity as being bigger than themselves. Naturally, the other members of the Nardone family — Mark’s twin sister Margot, older brother Michael, and Tom’s wife, Lisa — participate frequently. Tom’s good friend Charlie and his daughter, Jesse, were also early adopters of the idea, joining the trash fishing missions in their own 13’ Whaler.

Soon there was a Trash Fishing Facebook page, where they started recruiting friends and neighbors to compete in official Trash Fishing Contests.

“Picking up trash doesn’t necessarily sound like fun to a lot of people,” Tom says. “So to make it more fun, we made it competitive. Think of it like a bass fishing tournament, but for trash.”

At the contests, awards are given for the largest piece of trash, the most unusual items found, the biggest total volume of trash collected, and so on. The Trash Fishing team offers free “Gripper Grabber” reaching tools for anyone who brings their boat to an event. They also make T-shirts for people who attend multiple times. Free donuts are typically included.

“It’s fun and easier than regular fishing,” Tom explains. “It’s great for parents to do with their kids, because there’s no baiting of the hook and usually no waiting for the fish to bite.”

In the off-season, Tom and his family keep the enthusiasm going with events like beach cleanups and magnet fishing (from land). They run a volunteer group called the Mower Gang to mow abandoned playgrounds.

They make it a point to hit the water when traveling, as well, trash fishing in spots including Tampa and Houston. Last year during a trip to St. Augustine on Florida’s Atlantic Coast, they hooked up with a member of the Waterkeeper Alliance for a guided outing with the whole family.

The Waterkeeper Alliance is a nonprofit network of grassroots leaders working to patrol and protect the world’s waterways. It unites more than 300 Waterkeeper groups protecting more than 2.5 million square miles of rivers, lakes and coastal waterways on six continents. (A mission that’s right up Tom and Mark’s alley.)

The Trash Fishing crew has continued to grow, gaining Facebook followers and participants with each event. For 2019, the team had set a goal to collect a pound of trash for every dollar in their $2,000 budget. By the end of the year, they’d far exceeded that goal, gathering more than 3,500 pounds of trash, with $600 still in the bank.

In December, they held a chili cook-off and raised $5,000, which will go toward renting boat slips where Tom and Charlie can keep their respective Whalers. “We’re really excited to keep the boats on the water,” Tom says. “That will allow us to go out fishing on weeknights, or whenever, and take out anyone who wants to go.”

They’ve reached out to local celebrities to spread the word, and they hosted an information table at a recent event held by local Boston Whaler dealership Colony Marine, where they chatted with lots of enthusiastic fellow boaters.

One benefit of today’s socially connected world is that you don’t need to be near Detroit to get involved. Trash Fishing hosts contests online via its Facebook page and invites boaters everywhere to post their biggest hauls and craziest finds. “It’s a fun way to get a virtual pat on the back from our community,” Tom says

Looking forward, he hopes to expand the positive impact as more and more boaters jump on the trash-fishing bandwagon and chase goals of their own. He offers words of reassurance for anyone reluctant to get onboard with garbage: “We usually wear gloves, and people use nets and shovels and rakes so it doesn’t get too gross,” he says. “But the funny thing is, the trash has been in the water… So for trash, it tends to be pretty clean.”

Calling all Whaler community members: Visit TrashFishing.com for tips from Tom, Mark and the crew on organizing your own clean-up efforts. Then head to their Facebook page to share comments and photos of your own trash fishing haul! Visit Facebook.com/TrashFishing.