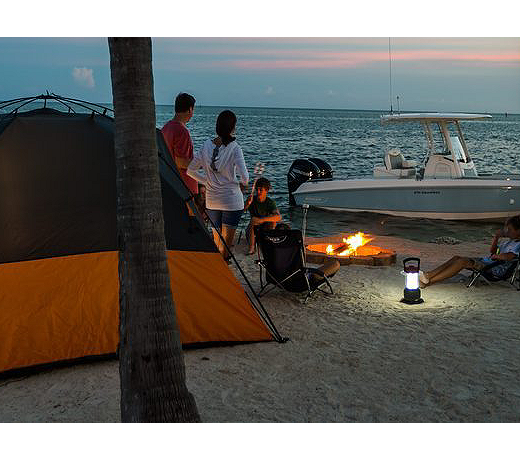 Dan Wobby and his family have found that the key to unlock Fort Lauderdale’s best living comes in the form of a Whaler.

In some circles, Fort Lauderdale is nicknamed the “Venice of America.” Now, architecture, language and local cuisine may suggest otherwise, but in terms of pure accessibility by water, it’s a sound comparison. With its picturesque, winding length of the Intracoastal Waterway lined with palm trees, restaurants and assorted stopovers, boating through Fort Lauderdale is more than a means of transportation—it’s a way of life.

Dan Wobby knows this well. He and his wife, Carol, purchased a home in the area about two years ago and quickly found their happy place was on the water. Dan’s job keeps him in Illinois for much of each month, but he makes the journey south more weekends than not. And thanks to a gleaming 270 Dauntless in their backyard, the trip from home to sea is practically automatic.

“I’ve loved Whalers since I began spending time on Cape Cod and Martha’s Vineyard years ago,” Dan explains. “They’re great boats that handle the ocean well and have a timeless beauty. And I’ve always found the unsinkable aspect compelling.”

On Carol’s side of the family, one Whaler in particular has made its mark—a 1979 Sport that her father bought used and kept in pristine condition for decades, motoring the rivers near his home in Virginia. He passed the boat down to Carol and her twin sister, Diane, and together the sisters and their growing families put it to great use around Edgartown Harbor on Martha’s Vineyard. Kids and grandkids grew up fishing, skiing, tubing and going to the beach. The Sport served double duty as a water taxi and photo boat when members of the family were learning to sail. Today, younger sis Susan and her clan still use the boat on the lakes of North Carolina.

For Dan and Carol, though, the Fort Lauderdale house prompted the search for a vessel to call their own. Which manufacturer to go with wasn’t even a question. “We have loved that Whaler Sport for so many years, and we saw how many people had them up in Martha’s Vineyard,” Dan says. “It seemed like practically everyone had a Whaler that had been in their family for generations! That experience definitely influenced our decision.”

Deciding on a specific model came down to how they planned to use it. “Whenever we’re in Fort Lauderdale, ours is a big house, so we always have a bunch of family and friends around,” he explains.

“We needed a boat that was very versatile. We needed to have a place for my daughter and her friends to sunbathe, it needed to be fishing capable, we wanted to be able to do some ocean cruising, and we needed something that would be great for spending a lot of time on the Intracoastal.”

They soon narrowed their choices down to the Boston Whaler Vantage and Dauntless families, but as soon as they laid eyes on the 270 Dauntless at their local dealership, Lauderdale Marina, the decision was made. “The Dauntless suited us perfectly. We loved it right from the moment we saw it,” Dan says. “Clean lines, all the versatility we were looking for… I mean, to have seating for four adults in the bow, all facing forward, is very unusual—and for our application on the Intracoastal, it’s really nice.”

The Intracoastal Waterway extends some 3,000 miles, running between the Atlantic and Gulf coasts of the U.S. Its main function is to provide transport ships with a safe, easily navigable route, but it also makes for terrific sightseeing. At the point where it intersects Fort Lauderdale, the waterway is flanked by glamorous hotels, high-end real estate and entertainment complexes that provide plenty of places to stop and indulge, while wildlife including manatees, osprey and all manner of fish offer a natural counterbalance to the glitz. Further afield, the system of canals, rivers and inlets weaves through tranquil marshes and flatlands, making it an ideal spot for relaxed cruising.

With son Thomas and daughter Joann off at college, the Wobbys are keen on anything that helps them all spend time together during school holidays. Winter and spring breaks are prime time to seize every boating option available. Florida’s “Venice” is rife with opportunity, and the Wobbys’ house happens to be on a stretch of canal with what Dan calls “an unlimited number of waterfront restaurants with dockage”—to the point where they jump in the boat more often than the car to head to dinner.

When Dan is back in Illinois, Carol often takes the Dauntless out with friends, following the same “my other car is a boat” outlook that makes Fort Lauderdale such a treat. And then there’s the ocean—a playground unto itself.

The Wobbys have ventured as far as Miami and figure there may be a Bahamas trip in their future. “The ocean side is a beautiful ride, with the beaches and the coastline stretching out beside us. We can be in South Beach in a couple hours,” Dan says.

When they opt to stay closer to home, Fort Lauderdale Beach offers free mooring balls where the Wobbys can tie up for the day and snorkel or take their kayak out on short trips from the Dauntless and back. “There’s something about that blue ocean…” Dan says wistfully.

He and Thomas also love to fish for tuna or mahi-mahi, with friends or just father and son. More often than fishing, though, it’s the cocktail cruises that comprise a majority of the Wobbys’ outings. Their faithful dog, Maddy, is more than happy to accompany. “She’s good with the boat—wherever we are, she wants to be,” Dan says.

Frequenting area eateries like Flip Flops and 15th Street Fisheries, they meet plenty of fellow Whaler owners and have run into neighbors who, like the Wobbys, prefer boating as a means of transportation. Gondoliers they are not, but the smiles on their passengers’ faces are as wide as any tourist’s in Italy.

As far as his dealership, Lauderdale Marina, is concerned, Dan gives a special nod to service managers Kevin and Jason, whom he credits with going out of their way to ensure he and Carol are happy with their new boat. “They’ve actually sent people over to our house to check on it!” Dan says. “It’s been an incredibly positive experience the whole way.”

The Wobbys look forward to a summer packed with even more hours on the Dauntless, cruising to new restaurants and scenic spots on the Intracoastal, filling the livewell from time to time, and enjoying the rhythm of a city whose veins course with boating. Maddy may learn a new trick or two, and Joann and Thomas may well pick up the art of captaining. They haven’t taken to the helm yet, but Dan’s pretty sure it’s only a matter of time. “Boating’s a huge part of our lives. I think they’ll feel the Whaler influence just like I have.”