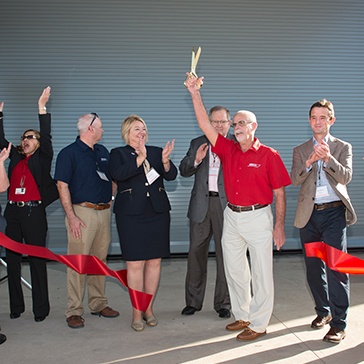 In 2014, Boston Whaler broke ground on a new era in its legendary history, introducing its largest model ever with the sophisticated new 420 Outrage. On Jan. 13, 2015, Whaler celebrated the significant expansion to its facility that makes production of the 420 Outrage possible: the addition of nearly 60,000 square feet of under-roof manufacturing space. At an exclusive event held on site in Edgewater, Boston Whaler President Huw Bower led a ribbon-cutting ceremony before a crowd of local and state politicians, executives from parent company Brunswick Corporation (NYSE:BC) including President and Chief Operating Officer Mark Schwabero, esteemed members of the press and the entire Boston Whaler staff.

Were here to commemorate the expansion that our facility has undergone, but more than that, were here to acknowledge all that it symbolizes, said Bower. I would like to extend our deepest appreciation for the tremendous work that went into making such growth possible.

This expansion gives us the capability to continue to grow our portfolio, Bower continued. We are proud to have introduced more than a dozen new boats in less than three years time, including our remarkable new 420 Outrage, and we look forward to continuing this trajectory of innovation. Expanding our facility underscores our commitment to continued growth and enables us to meet the high demand we have already seen for the 420.

The facilities expansion comes as part of a $10 million investment by the company into new products, technologies and capabilities. Additionally, Whaler has created more than 120 jobs in the last 12 months. Were committed to the Edgewater community and thrilled to be in a position to create employment opportunities, said Bower.

In a speech reflecting the theme of gratitude, Bower went on to thank the many organizations that contributed to the expansion, including Brunswick, Boston Whalers dealer network, the loyal family of Whaler customers worldwide, partners including Mercury, and several key individuals. Project manager Mark Essig, who oversaw the eighteen-month project, was presented with a gift and special acknowledgment. Longtime employees including Danny Ryan, Whalers longest employee with over 41 years at the company, were asked to wield the golden scissors in the ribbon-cutting ceremony alongside Bower and Schwabero.

To achieve such a high level of success in the face of a difficult economic climate is a point of pride, yes  but moreover its a testament to the fantastic employees who make it possible, Bower said. The credit is all yours; you are the finest marine team in the world.

Following the ceremony and opening presentations, guests at the event were treated to tours of the new facility as well as test rides of popular Boston Whaler models.

For nearly 60 years, Boston Whaler has been at the forefront of the boating industry, committed to progress in terms of how we can improve the boating experience, said Jeff Vaughn, Vice President of Sales, Marketing and Customer Service. Versatility, reliability and simplicity: these are the core strengths of every Boston Whaler, and these are the areas in which we will continue to push the envelope. The Edgewater facilities expansion further demonstrates our dedication to helping our customers enjoy the very best that boating has to offer.