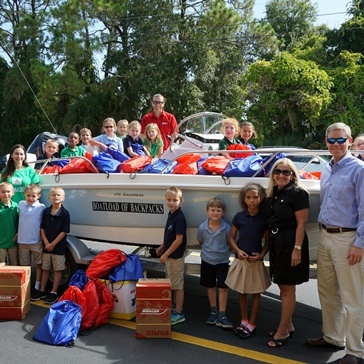 Boston Whaler held its sixth annual “Boatload of Backpacks” fundraiser to help area students start off the new school year on the right foot. This year marked Whaler’s biggest ever donation, as more than 150 backpacks filled with school supplies were loaded into a 170 Dauntless and delivered to three local elementary schools.

It was the first time Boston Whaler’s new President, Nick Stickler, participated in the event. “Boatload of Backpacks is such a great program, and it was wonderful to be involved firsthand,” said Stickler. “Boston Whaler’s employees are passionate about building the best boats in the world and supporting success within the local community. We would not be the strong company we are today without the community’s support, and we’re proud to be able to give back.”

"We would not be the strong company we are today without the community’s support, and we’re proud to be able to give back."
About Boston Whaler: