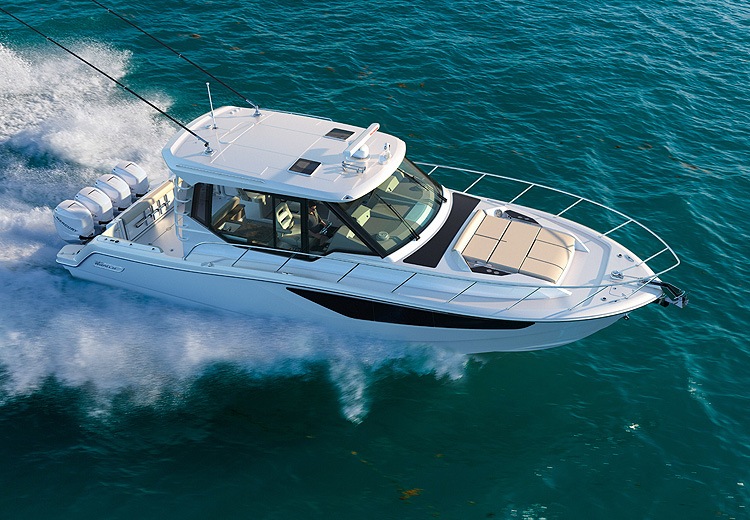 As the Fort Lauderdale International Boat Show got underway, Boston Whaler revealed the all-new 325 Conquest, joining the 405 Conquest to kick off a new chapter for the ruggedly sophisticated series. Both boats premiered on the world stage alongside an array of Whaler models—including the 380 Outrage with new quad engine packages—capturing the attention of show attendees and signifying an exciting period of growth for Boston Whaler.

“The 405 Conquest and 325 Conquest mark the next evolution for the series, bringing versatility, comfort and capability to a whole new level,” said Boston Whaler President Nick Stickler. “We’re thrilled to introduce the two models together and have already received a tremendous amount of positive feedback.”

The 405 and 325 Conquests, aka the SUVs of the Sea, deliver “no excuses” performance capability paired with luxury touches that encourage entertaining and overnighting. Designed to empower epic offshore fishing runs as well as comfortable multi-day cruises, they offer inviting cabins, inventive seating, purposeful amenities and seamless performance.

Further, the new Conquests give boaters a greater sense of connection with the water, thanks to features like a full-beam windshield and restyled side glass that provide unobstructed visibility; and a dive door with removable ladder that makes it easy for anglers to drag large catches onto the deck, or for swimmers and divers to climb back onboard. Breakthroughs in seating include a new portside companion lounge with hidden table that converts to multiple positions, and on the 405, an inviting adjustable bow chaise lounge with its own personal stereo system. Both boats feature a well-appointed helm deck wet bar complete with a sink, refrigerator (optional on the 325), and storage, making it easy to host a crowd. The 405 Conquest also features a highly customizable transom prep area, with several options for fishing and entertaining.

Below deck, the cabin of each new Conquest will herald a return to overnighting for many boaters. The 405 features a private master stateroom and guest sleeping quarters, an enclosed head with separate shower, a convenient galley and more, with luxury touches including a rain shower and an innerspring mattress. The 325 includes a convertible V-berth sleeping/dining area and guest accommodations, and both boats feature a full-height hanging locker and premium finishes throughout.

The new Conquests are the first boats to come out of the recently opened Brunswick Boat Group Technology Center. Located at Whaler’s global headquarters in Edgewater, Florida, the BBGTC houses a formidable team of boat product development, engineering and design experts, all working together to expand the possibilities for the marine industry and improve the future of boating.

To that end, the addition of quad engines on the 380 Outrage marks an exciting new option for customers seeking maximum power and performance. This popular model is now available with triple and quad Mercury Verado engine packages, with a choice of 300-, 350- or 400-hp engines.

Fort Lauderdale visitors can explore a number of other cutting-edge features, including: Whaler Watch, a security system that uses telematics technology with cellular and satellite connectivity to provide remote visibility and control of key boat components; NAUTIC-ON, a remote-monitoring system that uses cellular data to convey vital systems data and boat location via a convenient app – comes standard on all boats 25’ – 38’; and Raymarine’s new DockSense Alert technology. Demoing during the show on a 320 Vantage with Raymarine Axiom XL display, DockSense Alert uses FLIR stereo vision camera technology to detect and alert the captain when obstacles are near the boat and its blind spots. An array of 3-D cameras with advanced motion sensors accurately measure distances to the dock, pilings and other moored vessels, and create a bird’s-eye view of the boat and its surroundings—making it easier than ever to visualize the effects of outside sources and dock your Whaler in even the most challenging conditions.

Between the surprise unveiling of the 325 Conquest, the premiere of the 405 Conquest, the abundance of new technology, and the high attendance numbers, the Fort Lauderdale Boat Show has been a big hit for Whaler fans. And with its continued focus on innovation and excellence, the company is looking forward to many successful boat shows ahead.

"“The 405 Conquest and 325 Conquest mark the next evolution for the series, bringing versatility, comfort and capability to a whole new level,” said Boston Whaler President Nick Stickler. “We’re thrilled to introduce the two models together and have already received a tremendous amount of positive feedback.”"
About Boston Whaler: