A group of Boston Whaler owners journey to Split, Croatia, to explore its breathtaking coastline.

Whaler owners are an adventurous bunch. They can be found in all corners of the globe, enjoying all manner of activity: wakeboarding in the Abacos, tournament fishing in Puerto Rico, sightseeing in Abu Dhabi, braving frigid winters to commute by water in Switzerland… So while it wasn’t surprising to spot a group of Boston Whalers darting along the rocky shores of Croatia, it was certainly a sight to behold.

Just imagine: A 320 Vantage, with its athletic dual-console profile and tan hull. A sleek, versatile 240 Dauntless, ready and raring for action. And a nimble 150 Montauk, classically handsome in white. As the trio skirted effortlessly along the Dalmatian coastline, beachgoers lowered their sunglasses to take in the view. 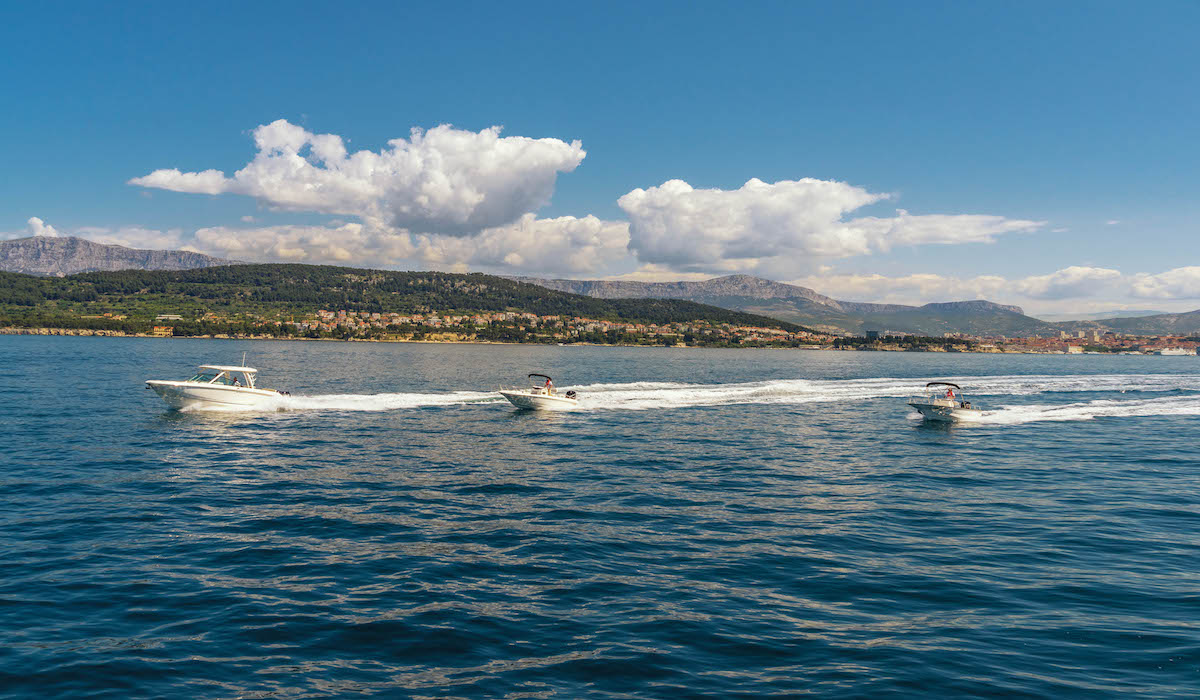 Of course, the Whalers were not alone in claiming “easy on the eyes” status. The Adriatic Sea holds some 1,000 islands in total, a collection of craggy structures piercing through cerulean waves. These waters hold several lifetimes’ worth of territory to explore, and enough striking vistas to overload Instagram. In recent years, boaters have flocked to Croatia’s coast to enjoy watersports, pristine beaches and wildlife galore. It’s easy to see why.

Our Whaler trio began its trip in Split, the second largest city in Croatia. At the center of town sits a well-preserved Roman palace, commissioned by Emperor Diocletian at the turn of the fourth century AD. The UNESCO World Heritage site holds a maze of shops and restaurants just begging to be strolled through.

Over in the harbor lies the Riva, a promenade that’s been called “the city’s living room.” Blessed with spectacular surroundings, the Riva’s cafes and restaurants invite boaters to sit for a spell under the welcome shade of palm trees and appealing architecture.

Split holds many other attractions for Whaler boaters, including excellent fishing opportunities. Healthy populations of Amberjack, Atlantic bonito, tuna, mackerel, mahi-mahi and even squid beckon anglers to drop a line. And you never know what those anglers might shout if they hook the big one; languages spoken in the region include French, German, Italian and Russian, in addition to Croatian. The diverse cuisine, too, reflects Split’s standing as the third largest port on the Mediterranean. 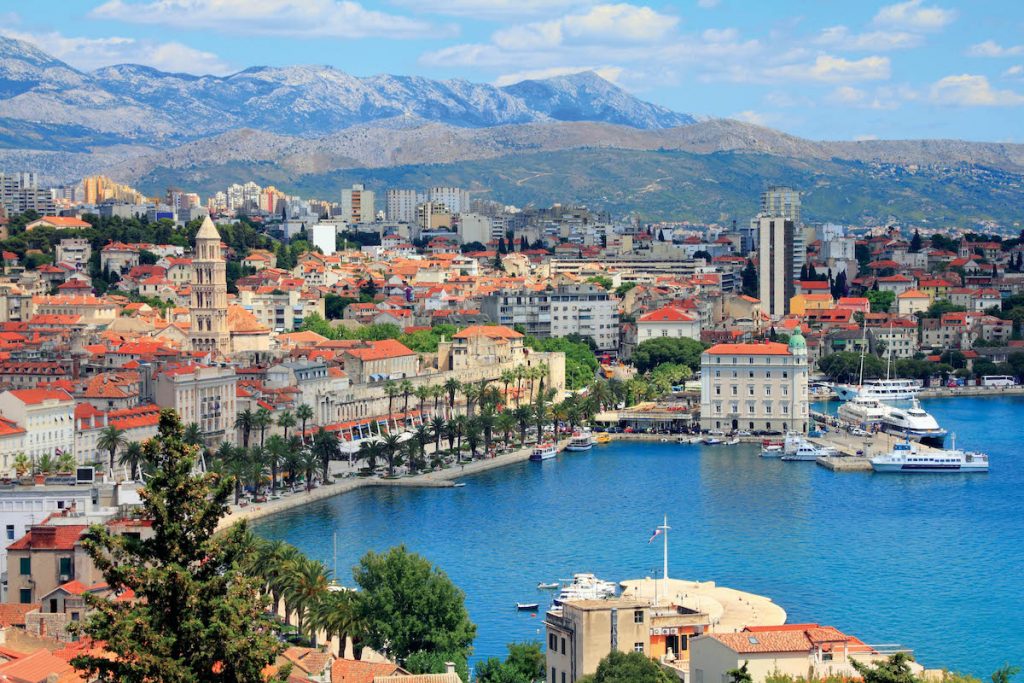 Departing by water from Split, the choices are nearly unlimited. A hungry boater might start by heading to Solta, where local olive oil tours are hosted by esteemed producer Olynthia. There’s no better place to learn the finer points of olive-oil tasting than under a canopy of native Dalmatian olive trees. And what galley gourmand couldn’t benefit from keeping a bottle of Croatia’s best on hand?

Another great destination is Stomorska, a seaside town in a protected harbor just across the water from Split. The promenade there features many restaurants and open-air bars good for a cold beverage on a warm afternoon. Visitors can follow the winding roads back into charming old towns filled with quaint terra-cotta houses set against limestone walls.

Having taken in their fill of stone walkways and village life, the Vantage, Dauntless and Montauk crews set off to explore the Blue Grotto sea cave of nearby island Vis. Depending on the season and time of day, sunlight will reflect through the water covering the cave’s white floor, bathing the walls in a brilliant aquamarine. It’s a must-see for any boater in the region, and in fact the Blue Grotto and its emerald-hued neighbor, the Green Grotto, draw more than an estimated 10,000 tourist visits each year. 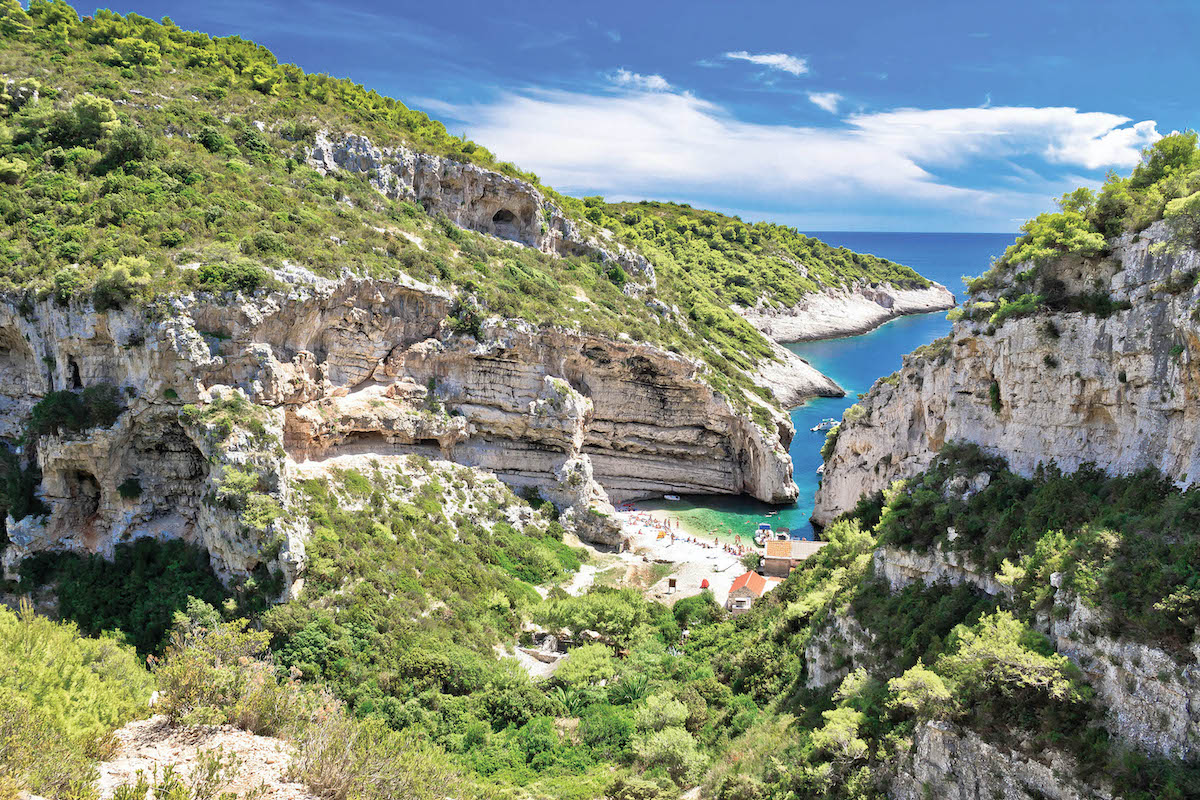 Seeking even more solitude, the Whaler group then made its way to the island of Hvar. Covered in lavender fields and stone fruit trees, this fertile location resembles Provence in more ways than one. Hvar produces nearly 8 percent of the world’s lavender oil, which makes a perfect souvenir for slipping into a head or cabin. “Lavender walks” run by local farms are definitely worth checking out.

The town of Hvar is one of the oldest in Europe, with a deep-water channel shielded by a mountain ridge and the hills of the Kabal Peninsula, making for smooth entry to explore the historic destination. On the island’s southwest coast lies Dubovica beach, a breathtaking and remote expanse that’s accessible only by boat. No cars allowed, but Whalers welcome. 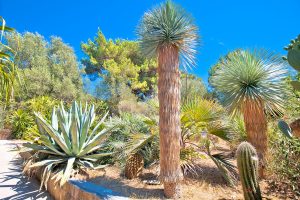 Next, the group cruised to the nearby island of Sveti Klement, where the fields of rosemary and aloe release a heady perfume. Consisting largely of a 300-year-old estate in Palmizana that was purchased by Italian professor and botanist Eugen Meneghello, the island boasts imported exotic plants from all over the world for a one-of-a-kind botanical park by the sea.

As with Dubovica beach, the best sandy beach on Sveti Klement, Vinogradisce, is only accessible from the water, giving the lucky Whaler owners a good shot at enjoying total privacy. Cultural attractions just inland include art galleries and restaurants, offering the chance to refuel before heading back out to sea.

Indeed, whether you travel by 240 Dauntless, 320 Vantage, 150 Montauk or any other Unsinkable member of the lineup, the true challenge of Croatia for a Boston Whaler owner isn’t getting from island to island; it’s deciding which island to explore first.

A Dauntless a day keeps the doctor away! Which one's your favorite?

Join the Fullanas as they use their 420 Outrage to enjoy Puerto Rico and surrounding areas to the...

Don't you want to just cuddle up? #320vantage #whalerlife