The Jurassic Fish of Costa Rica

Angler Henry Waszczuk’s ﬁshing adventures have been taking him around the globe for the last 35 years. He has produced and hosted more than 1,000 sportﬁshing TV episodes, and has experienced the best of the best in ﬁshing destinations, resorts and lodges. His black-and-white stalking segments are a trademark of his Fishing the Flats series. He also produces the popular Fins & Skins Classic Adventures. Henry has created a formula for outdoor success with his unique blend of education, entertainment and conservation. He owns two Boston Whalers: a 240 Dauntless, which he uses in Canada, and a 330 Outrage he uses in Florida and beyond. Here, Henry shares his experience fishing in Costa Rica with a chartered 345 Conquest.

The tide had just turned and was slowly pushing toward the open ocean. I was told that at certain points, the reef dips more than 50 feet below the surface. It’s hard to believe the topography can go up and down this close to shore.

Long ago, volcanic activity formed pinnacles that rise out of the ocean floor, attracting baitfish that start the predator-prey relationship. Marlin, sails, tuna and dolphin fish take advantage of the feeding opportunities here. One of the exciting things about Costa Rica is that these popular species can be taken year-round; the country’s fishability is known around the world. 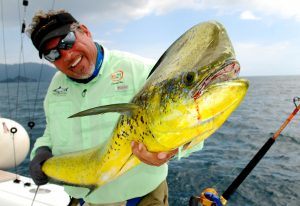 In most cases, it’s difficult to distinguish one reef structure from the next, but one thing is for sure: These underwater structures hold great appeal for smaller fish — and, in turn, for much bigger fish. They also host myriad invertebrates, including some spectacular anemones, which help keep the smaller fish there. To put it in layman’s terms, this volcanic region is a fish magnet.

Unlike most fishing in the open seas, where you have just water to look at, and maybe a flying fish or a turtle or two, when you fish the waters of Costa Rica, it’s apparent you are fishing structure. The surface activity is incredible.

Our trip from Playa Flamingo to the day’s fishing grounds was about an hour and a half in the direction of the Nicaraguan border. With calm seas, our Boston Whaler cut the water like a hot knife through butter. We were entertained by the Blue-footed Booby birds soaring at the same speed as our boat, occasionally picking oﬀ small bait from our wake. We could have stopped many times to ﬁsh, but I was told that the big ones were more consistent farther north, so north we went.

As we traveled past gorgeous islands and craggy mainland shorelines, it was easy to see why the ﬁctional Jurassic Park was set here. Mysterious, haunting and mesmerizing, I found myself wondering what dinosaurs may have crashed through each crevasse. The jungle forests are amazing — so full and so lush. This country is beyond beautiful. 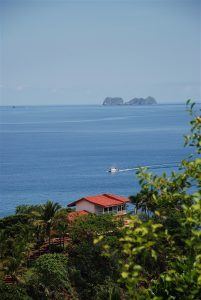 In what felt like no time, we had reached our destination. As the engines quieted to less than a purr, the crew quickly got the gear set in the live bait spread they had ﬁshed probably a thousand times before. The baits were big, just as I like them, and lively. We had goggle-eyed bonito, lookdowns and mullet. Once all the baits were in, we started our slow troll.

In a flash, one of the baits shot up through the water like a giant ﬁreball, a silver and black blur exploding on the surface and throwing water in every direction. “Rooster!” someone shouted. Line screamed oﬀ the reel.

I grabbed the rod and immediately had it in my rod belt, and it seemed as though, for the moment, the circle hook had done its trick. Wow, this ﬁsh is big, I thought. I knew it was, as I have had many ﬁsh on stand-up gear, but when this ﬁsh sounded, it felt as though he were diving to the bottom of the reef.

But no, here he came again, slow and easy this time toward the surface… until I felt his massive head shakes, where the rod tip would literally move a foot. (And we’re talking stout rods.) This ﬁsh took some time, and of course I never want to lose the first ﬁsh of the day — nor any ﬁsh, for that matter! After about 20 minutes, we could make out the distinctive color as an exquisitely bared rooster came to the surface, dorsal ﬁns spread like a rake.

Just when I thought he was ready to be lined, oﬀ he sounded again. Yes indeed, these roosters are tough on light tackle. Now, the ﬁght this ﬁsh gave was awesome to say the least, but with a few more cranks, our second mate grabbed the leader, reached over and hauled in an incredible 75-pound-plus rooster. We took some quick pictures before releasing him back into the beautiful blue. 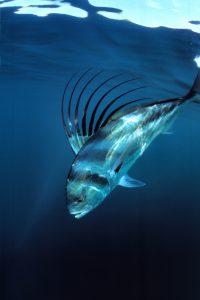 Deep-sea ﬁshing stirs the imagination unlike any other sport. Sizzling reels, bent rods and big ﬁsh… it’s a feast for the senses.

Eager to experience Costa Rica for yourself? Situated on the country’s Gold Coast, about 45 minutes from Liberia International Airport, Playa Flamingo is a world-class ﬁshing destination. If you can’t make the trip on a Whaler, Billﬁsh Safaris has the boats to make your trip a memorable one. Known for logging many world-record catches, the company oﬀers various ﬁshing packages with numerous charters available that know how to get you into ﬁsh.

Anglers trolling in the blue waters of the region are often treated to pleasant viewing surprises: humpback and pilot whales blowing geysers high in the air, sea turtles sunning on the surface, manta rays free-jumping, large schools of spinner porpoises, and even pods of killer whales migrating south along the coast.

My personal weakness, however, lies inshore. Imagine what a sight it must have been, millions upon millions of years ago, when volcanoes blasted out of the ocean floor and created what is now known as Central America.

Fortunately for anglers, this aforementioned phenomenon also created the underwater maze of formations that attract so many gameﬁsh to feed during their migratory routes. The entire western shore of Costa Rica is made up of spectacular works of nature, home to untold varieties of ﬁsh. The ﬁsh move up and down the coast, so naturally certain times of year make for excellent ﬁshing, whereas other months will be slow. The main fishing season is considered to run from April through December, and if you want rooster, giant snapper or mahi-mahi, the spring months are best.

However, in the months of January and February, the waters oﬀ Nicoya produce some of the best marlin fishing to be found anywhere in the world. Most of the ﬁshing is out of Playa Carrillo, to escape the strong Papagayo winds that often blow that time of year. When it’s cold in the north, like where I come from, this is not a bad destination to warm up.

Regardless of when you visit, it’s easy to appreciate the tectonic forces that shaped the country so many eons ago — and to find yourself dreaming of future Costa Rican adventures.

The pros at PENN® have released a new Conflict II reel designed to elevate your fishing game.

Look no further than the 170 Montauk

Texans David and Becky Burleson unleash their spirit of adventure — and their appetite for...